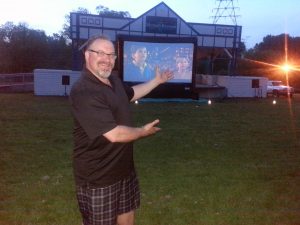 Beginning July 11th with the Disney hit "Frozen," Movies at Monteith will have officially kicked off for the summer! Albany Downtown Association is proud to announce the line-up for Movies at Monteith this year at Monteith Riverpark. If you're reading this after July 11th, fear not! We still have these blockbuster and classic movies ahead:

A new spin on an Albany tradition

Movies at Monteith is a new version of a longtime Downtown Albany summer tradition, previously known as Movies by Moonlight. This year we've moved the event to the park so families can spread a blanket on the grass and really enjoy the evening watching a great movie under the stars.

Moving to Monteith Riverpark will make for a better movie watching experience on all fronts — bigger screen, more room for movie fans, and it will also be much quieter than the previous location, near the foot of the Ellsworth Street Bridge.

Albany Downtown Association was able to purchase a huge inflatable movie screen that will allow more people to enjoy the show. The screen measures 24 feet wide and 20 feet tall. We are partnering with Albany Parks and Recreation on this event as they have provided the park and audio equipment for Movies at Monteith in exchange for occasional use of the ADA inflatable screen– a true win-win situation.

We are also going with a new movie distributor, allowing us to acquire the rights to movies previously unavailable, including Disney films. We also got lucky in that Disney's "Frozen" is blacked out every day this summer, except July 11th, the date we wanted to show it at Movies at Monteith.

The movies for the summer film series are designed to appeal to broad audience, especially families with children.

North By Northwest is a 1959 classic adventure/thriller starring Cary Grant and directed by Alfred Hitchcock.

The LEGO Movie will appeal to a wide audience when it's shown on the 25th.

E.T. was the winner of our "Fan's Choice" Facebook contest and offers families a chance to see this 1982 Steven Spielberg classic in a way they've never seen — under the stars!

Completing the line-up is Wizard of Oz on August 15th, within days of the 75th anniversary of its original release in August of 1939.

We'll see you this summer at Monteith Riverpark for Movies at Monteith!

For more information check the Movies at Monteith Facebook page. 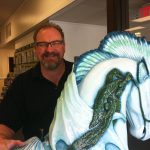 Rod Porsche is the Executive Director of the Albany Downtown Association. Rod has lived in Albany for 12 years with his wife Kate and his two girls, Savannah Kay, 11; and Maddie Jo, 9. The Porsche family fell in love with Albany's historic districts and have restored two homes in town, including the Governor George Chamberlain house — Albany's tallest home — which Rod thought was cool at first, though he's now tired of climbing four flights of stairs each day.

← Summer fun for kids in Albany
Adventuring in Albany: Paddling, biking and running →