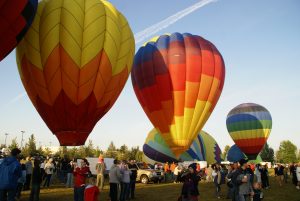 Albany’s ATI Northwest Art & Air Festival is a feast for the eyes and ears, with hot air balloons filling the skies each day at sunrise, artists displaying their colorful creations under the trees at Timber-Linn park all day, and free concerts on the lakeshore at night. The 2014 festival is Aug. 22-24 at Timber-Linn Memorial Park in Albany.

But there’s a lot more going on at the annual festival than just pretty balloons and popular music. Test your knowledge with these 10 little-known facts and figures about Albany’s annual Art & Air Festival.

The Albany Airport, where many of the festival events take place, is the oldest airport west of the Mississippi and the second-oldest airport in the U.S. (established in 1909, just six years after the Wright Brothers’ flight at Kitty Hawk, N.C.)

More than 200 kids got completely free airplane rides in 2013 as part of the Young Eagles program, sponsored by Remax Integrity-Doug Hall and Team Pendley.

The oldest Oregonian ever to ride in a hot air balloon took his flight at the N.W. Art & Air Festival. Erman Johnston, 102 at the time of his record-setting ride, went up in a balloon at the 2013 festival.

The festival is home to one of the biggest art shows in the mid-valley, with more than 75 artists from around the Northwest displaying works that range from paintings to pottery, wood sculpture to glass works.

The free Foreigner concert at the 2013 NW Art & Air Festival took home the state’s top award this year. It was named best music program within a festival or event by the Oregon Festivals and Events Association.

The 2014 event will feature “The Three Little Bees,”–whimsical hot air balloons shaped like bumblebees, with baskets that are wheelchair-accessible.

It’s not just about looking and listening. The Family Zone, sponsored by Red Robin, includes free hands-on crafts, active play, and a visit by The Reptile Man.

International foods, northwest wines, and microbrews are available all three days, and there’s a beer garden sponsored by Gilgamesh Brewing.

← Adventuring in Albany: Paddling, biking and running
Action and adventure at Jet Boat World Series in the mid-valley →

3 Comments on “Did you know? 10 Quirky facts and figures about Albany’s ATI Northwest Art & Air Festival”