Posted on November 2, 2015 by Maddie MacGregor

This post is more than one year old and could contain outdated information.

When it comes to honoring veterans,

the friendly little city of Albany, Oregon goes above and beyond, creating an annual celebration like you wouldn’t believe. More than 40,000 people pack the streets for the Veterans Day Parade on Nov. 11, making it the biggest celebration west of the Mississippi. The parade isn’t the only event in town, though. Keep reading for details on what to do, where to go, and where to stay when you visit Albany for Veteran’s Day 2015.

Honor the memories of fallen soldiers from Oregon by paying a visit to the Oregon Veterans Traveling Memorial Wall. This exhibit contains the names of every Oregon soldier killed in action from the Vietnam War through the present day. The wall will be on display at First & Lyon St. the week of Veterans Day. 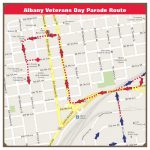 Mid-morning: Head downtown early to get your spot for the Veterans Day parade! Thousands of visitors line the streets every year for the big parade.

64th Annual Veterans Day Parade, 11 a.m. The event you’ve been waiting for! Oregon’s largest Veterans Day Parade starts on Pacific Boulevard and proceeds down the Lyon/Hwy 20 overpass to historic downtown Albany, going past the Albany Visitors Association office and winding up at the Linn County Courthouse. Stop at the AVA for free coffee and hot chocolate during the parade.

Got questions? For the definitive answer on anything related to Albany’s Veterans Day events, visit www.albanyveteransdayparade.org.

Looking for a place to stay when you come to town for the celebration? Check out Albany hotels and RV parks, many of them located near Timber-Linn Memorial Park, site of the Nov. 11 morning memorial service.

The AVA lobby is open by calling or knocking 9:00 a.m.-3:30 p.m. Monday through Friday. (Closed July 3, 2020 to honor Independence Day). For information regarding COVID-19 or to reach us click here.See updates for AVA, Albany businesses, and local events →
+