Fireworks and beyond – July 4th

While the City of Albany has no fireworks display in July (our big bang comes in August), Linn County communities hold several family-oriented Independence Day celebrations complete with food, music, and good old-fashioned fireworks. We’ve listed three below as well as a couple of “after-the-Fourth” events held the same week.

Brownsville Breakfast and Fireworks – July 4, 2017
On the Fourth of July, Historic Brownsville kicks off the celebration early with an old fashioned pancake breakfast fundraiser cooked up by the Brownsville Fire Department. At dusk, the fireworks create a multi-colored spectacle in the sky.
Learn more about this event

Harrisburg Old Fashioned Fourth of July – July 4, 2017
The biggest event in Harrisburg is the Old Fashioned 4th of July celebration. Get a good nights rest on July 3rd so you can be ready for activities that begin in the morning and do not end until the glow of fireworks fades. It doesn’t matter what day the 4th of July falls on. We always celebrate the 4th of July, on the 4th!
Learn more about this event

Lebanon Star Spangled Celebration – July 4, 2017
Fireworks over Cheadle Lake! Celebrate Independence Day with music and fun for the entire family, all on July 4th, starting at 6:00 p.m. at Cheadle Lake Park. Admission is $10 per carload or $3 pp for walk-ins. Games and prizes for children. Food booths, jugglers, face-painting and magicians. Please, no pets. For more information and contact email, use the link below.
Learn more about this event

Other fun things to do

East Albany Lion’s Club Lumberjack Breakfast – July 1 – 4, 2017
Get your sausage, eggs, pancakes, and coffee on at Timber Linn Park. The breakfast starts each day at 6:00 a.m. and lasts until the last pancake is flipped at 11:00 a.m. All proceeds from the four day event go to local charities and the Lion’s sight and hearing program.
Learn more about this event

Albany Civic Theater “Red, White and Tuna” – July 6, 7, 8, 2017
The much anticipated third installment in the Tuna trilogy takes the audience through another satirical ride into the hearts and minds of the polyester clad citizens of Texas’ third smallest town. It’s been several years since we left Bertha and Arles dancing at the end of A Tuna Christmas. Did the romance blossom? Has Didi Snavley received any cosmic communications from R.R.’s UFO? Did Stanley make his fortune in the Albuquerque taxidermy business? These and other burning questions will be asked and answered in the side-splitting spoof of life in rural America. 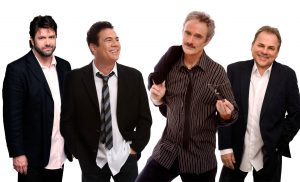 River Rhythms – Pablo Cruise Concert – July 6, 2017
Spread out a blanket and enjoy music under the stars at Monteith Riverpark. Groove to the music of major stars from across the US. Seating is available on a first-come, first-served basis. There are children’s activities prior to the concerts, an adult beer garden, food, a bike valet, and trolley rides around downtown. Thursday evenings, 5:30 – 9:00, at Monteith River Park. July through August.
Learn more about this event

Crazy Daze – July 6 – 8, 2017
You don’t want to miss Crazy Daze, July 6th – 8th, Downtown Albany’s oldest event. Originally called Bargain Days in 1898, the name was changed to Crazy Daze after WWII. Merchants will be setting out their merchandise on the sidewalks throughout Downtown, offering them at crazy reduced prices. Merchandise changes daily so you might want to come down all three days. Grab your sunscreen or a hat and stroll our sidewalks for crazy deals and crazy delicious food at our fabulous Downtown eateries.
Learn more about this event