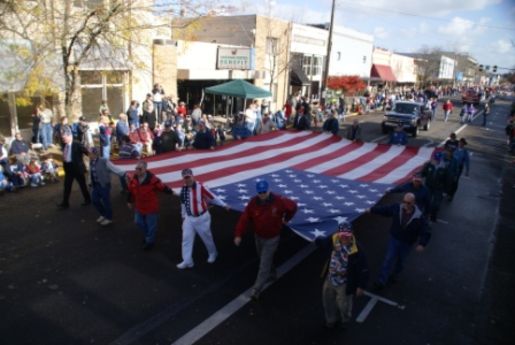 Posted on September 17, 2018 by Maddie MacGregor

This post is more than one year old and could contain outdated information.

Commemorative 2018 Veterans Day buttons are on sale for $5 and are selling fast, according to Al Severson of the Veterans Commemoration Association in Albany. The theme for this year’s Veterans Day parade in Albany is “A Century of Valor,” celebrating the 100th anniversary of the end of World War I.

“We have 2,000 of them and proceeds will help cover costs of the parade,” Severson said. “I’ve probably sold 40 of them just because people have seen me wearing them.”

The buttons feature artwork of a soldier, flag and poppies inspired by the poem “In Flanders Fields.” They read: A Century of Valor, 2018, Albany Veterans Day Parade.” The buttons can be purchased at the Frame House, 434 West First Ave., Albany.

For $20, people can become members of the Veterans Commemoration Association and will receive four buttons, Severson said.

A few of the 2017 buttons are still available for purchase, Severson said. “Last year was the first year for the buttons and we hope to make it an annual thing,” Severson said. “We’d like people to collect them like the old Timber Carnival buttons.”

Severson said he is impressed with the 12 applications that have been received for the Veteran of the Year. “It is the most we’ve had in many years,” Severson said. “They came from Albany, Lebanon, Junction City and more and the veterans had very impressive military records.”

Severson said a committee is reviewing the applications and should be completed by the end of the month. “We have one nominee who is 100 years old,” Severson said. “We have several in their 90s and some in their 80s. They represent World War II, Korea and Vietnam.”

Severson said applications are also coming in for parade entries. The 67th annual Veterans Day Parade will start at 11 a.m. on Nov. 10 and will celebrate the 100th anniversary of the end of World War I at the “11th hour, on the 11th day, of the 11th month of 1918.”

Entry forms can be picked up at the Frame House or by 541-981-2390 or emailing: albanyveteransdayparade@gmail.com.

The AVA lobby is open 9:00 a.m.-5:00 p.m. Monday through Friday. Masks are required and please maintain at least 6 ft distance from others not from your household. For information regarding COVID-19 or to reach us click here.See updates for AVA, Albany businesses, and local events →
+