Enjoy the freedom of biking around Albany

The writer of this post is Hasso Hering, former editor of the Albany Democrat-Herald, who enjoys bicycling almost daily. His observations about the city 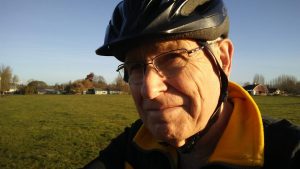 and surrounding area come from the seat of his own bike and can be read about in his blog at hh-today.com.

So, you want to see Albany from the seat of a bicycle? Great idea, and it’s easy to do. Here are some suggestions for short rides you and your family might try once you get the bikes out of the garage and dust them off.

The easiest way to get started is to pick a neighborhood and cruise on the residential streets. They have very little traffic, especially on weekends. You might start with your own neighborhood just to get used to riding on city streets, watching for cars and for people crossing the street, and staying aware of your surroundings while pedaling.

Once you tire of that (pun intended), pick another neighborhood to explore. The challenge then is how to get there, which usually means taking one or more busy streets where car traffic moves pretty fast. But maybe you can load the bikes on top of the car and drive there, park and then spend half an hour riding around. 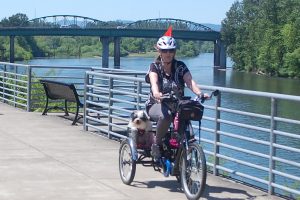 Or you can try this:

— Follow the Dave Clark Clark Riverside Path from Monteith Park east away from downtown. It will take you past the Wheelhouse office building and the DeLuxe Brewing Company to the Willamette Neighborhood, Bowman Park and, if you keep going on the dirt trail past Bowman, to Simpson Park. Going there and back takes maybe 20 minutes.

— You can extend the Clark Path route by making the rounds of the Talking Water Gardens. The entrance is off the Simpson Park parking lot. It helps to have fat tires, like on a mountain bike, because the paths are surfaced with gravel or decomposed granite, and some are hard to ride because they’re covered with wood chips. But the chance at seeing wildlife, from turtles to eagles, is worth it.

— Follow the Perwinkle Bike Path from Oak Street near Lowe’s, going south to Grand Prairie Park and back. The only tricky part is where the path stops on one side of Queen Avenue and picks up on the other side of the Queen-Geary Street intersection. The best way to cross, especially with kids, is to walk your bikes to the intersection and get across with the help of the signal.

If you want to get out of the city limits at least for a short distance:

— Head west out Queen Avenue from West Albany High School and turn right at Riverside Drive. Cross the old Oregon Electric rail line on Riverside, then turn right on Bryant Drive. Pretty soon this turns into Bryant Way and leads back into Albany. A short climb up the Third Avenue bridge across the Calapooia River puts you back downtown.

There are plenty of alternatives, some a little longer.

When I have the time, I sometimes ride north out of town on Salem Avenue and tour the new residential sections of formerly rural Millersburg. Or I duck under the freeway to take Murder Creek Road to Kamph Road, turn right on Scravel Hill and return to Albany on Knox Butte Road. The climbs up Murder Creek and later Scravel Hill add a little exercise to this ride.

For seeing a bit of nature, it’s fun to take a mountain bike down the Takena Landing Trail on the north side of the Willamette, starting at Takena Landing Park, or the Simpson Trail on the south side, starting at Simpson Park and First Lake. Or there’s the Oak Creek Trail off 53rd Avenue in South Albany. But don’t try the trails unless it’s been dry for a few weeks. Wet weather turns some sections into bogs.

On the paths and trails, you’re going to encounter walkers, many with dogs on long leads or no leashes at all. Go slow and be ready to stop. Caution and courtesy are two C’s the trails demand.

People on bikes don’t necessarily need suggestions on where to ride. If you don’t already know from your own experience, being on a bike is freedom itself. And freedom means you can go anywhere you like. (hh)