After two years of “reverse” parades due to the Covid-19 Pandemic, Albany and Linn County will see a return to tradition with the 2022 Linn County Veterans Day Parade on Friday, Nov. 11.

The annual event, the largest such observance west of the Mississippi River, will begin at 11 a.m., and will return to its traditional route: starting on Pacific Boulevard down the overpass on Lyon Street into Downtown Albany, left onto Second Avenue, then to Ferry Street, where it turns left again onto 3rd Avenue and heads to the Linn County Courthouse.

For more information about the parade and how to take part, click here. 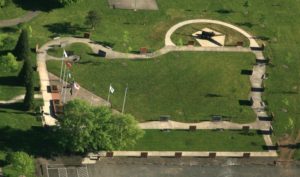 After several long years of work by the former Albany Jaycees and construction provided by numerous volunteer builders, the Linn War Memorial was finally dedicated at Timber Linn Memorial Park on May, 30, 1969.

For nearly 40 years following the dedication, the memorial did not change much. Albany Parks & Recreation Department helped to maintain the memorial with regular landscape and gardening services. After a newspaper article about the memorial was published in the Albany Democrat Herald, a local Navy veteran, Garner Pool, visited the site and discovered that his brother’s name, Sylvan B. Pool, was missing. Research to locate his missing records helped unearth other names that should have been included in the original construction. 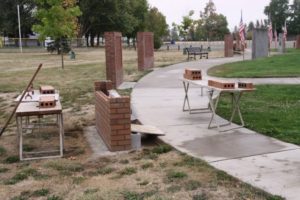 During the expansion planning, it became apparent the memorial not only needed to include veterans who had inadvertently been missed from the Vietnam War, but to honor veterans from all wars fought in the 20th century.

Pool was instrumental in forming the Linn County Veterans Memorial Association. He went to the City of Albany and the Parks & Recreation Director, Ed Hodney, for help with the expansion proposal. Loans and grants were needed to start work, and many in the community stepped forward to help fundraise.

Included were in-kind contributions of materials and labor, including an anonymous donor who offered to lend the group the $21,000 necessary to begin the work.

The expansion included the opportunity to purchase engraved “sentry bricks” at $50 per brick. The bricks would contain the name of any veteran who served honorably, from any part of the state and the US.

The memorial was designed so that the original walls with the bronze plaques (for the Linn County Vietnam War veterans) faced outwards, while the inscribed sentry bricks faced inwards towards the plaques—a symbolic gesture of support.

Randy Martinak of the LCVMA was responsible for moving the large Howitzer located in an awkward part of the park. He worked with his cousin (who just happened to be an engineer) to safely relocate the cannon. This was no small feat, as the large gun weighed 36,000 pounds!

With all of the moving parts (and cannon) in place, the refurbished and enlarged memorial was ready to receive visitors and hold gatherings.

The time has now arrived when the memorial needs to be expanded once more to accommodate requests from veterans’ families. The Linn County Veterans Memorial Association hopes their state heritage grant application and the sale of new bricks will help fund this current expansion project.

There are about three or four stages in the planning process and the association hopes to break ground in 2020 and complete the expansion by Veterans Day 2020.

A memorial service is held each year on Veterans Day, normally the same day as the Albany Veterans Day Parade. The parade is the largest veterans day event west of the Mississippi River. Click this link for more information on the 2021 parade which will be updated as information becomes available. You will also find current information about the memorial service at Timber Linn and a memorial breakfast on our monthly events calendar.

School Field Trips: Educational school tours may be set up through the Linn County Veterans Memorial Association by sending requests to LCVMA, P.O. Box 2739, Albany, OR, 97322.

Bricks: For those interested in requesting an engraved brick to honor their loved one who has served in the US Armed Forces, send copies of the service member’s DD Form 214, the application form below, and payment ($50 per brick) to LCVMA, P.O. Box 2739, Albany, OR, 97322. *Please note that this all-volunteer group only has the capacity to install approximately 65 bricks per year.

Finding the names of veterans on bricks

Brick location at the memorial: To access a list of the veteran names at the park, view the PDF document below.